Back in 2014, myself and Ciaran Maguire set about building a chrome extension that could quickly and easily manage other chrome extensions, turning them on or off quicker and better than the native experience. Our goals were simple, we wanted it to work, but also be pretty. We built it, and it ticked at least one of those boxes... but in the last few months we've breathed new life into the plucky little extension to make it more reliable, and we have some interesting plans to support its consistent growth in user numbers.

Install the extension here, let us know what you think :)

At the time, myself and Ciaran were still getting to grips with web development. I had dabbled in one or two Chrome extensions, and made one or two small sites, just like Ciaran, but we'd never collaborated on anything, at least not in terms of both of us writing code.

I was based in Dublin, working full time as a Product Manager. Ciaran was on the far side of the world, travelling South East Asia. The timezone differences proved interesting, as I'd work in the evening, commit my changes and go to bed. He'd see my code a few hours later and probably grit his teeth and curse my very existence.

For context, I was far less concerned with elegant, succint code and more focused on just getting it working, whereas Ciaran needed things to be well laid out, clear, and understandable.

Guess who gets blamed for the reliabiltiy issues... :P

What does the extension do?

I'm glad you asked. As I said, our goals were simple, that it could toggle extensions on or off quickly and easily, but also look good. This was very much a project where we were solving our own problems and learning to code, which gave us a new idea shortly after we begun building it...

We thought it'd be cool if users could "group" extensions together so that multiple extensions could be enabled or disabled at the click of a button. The idea popped up because as we were learning web dev, we came across a number of Chrome extensions that help (Emmet Livestyle, Lighthouse), to name but two.

We regularly wanted the turn a bunch of extensions on for one mode of browser usage, and then turn them all off when we were finished. And so, the "Groups" feature was born. This allows users to group extensions together, making it quick and easy to switch into different types of web browsing. 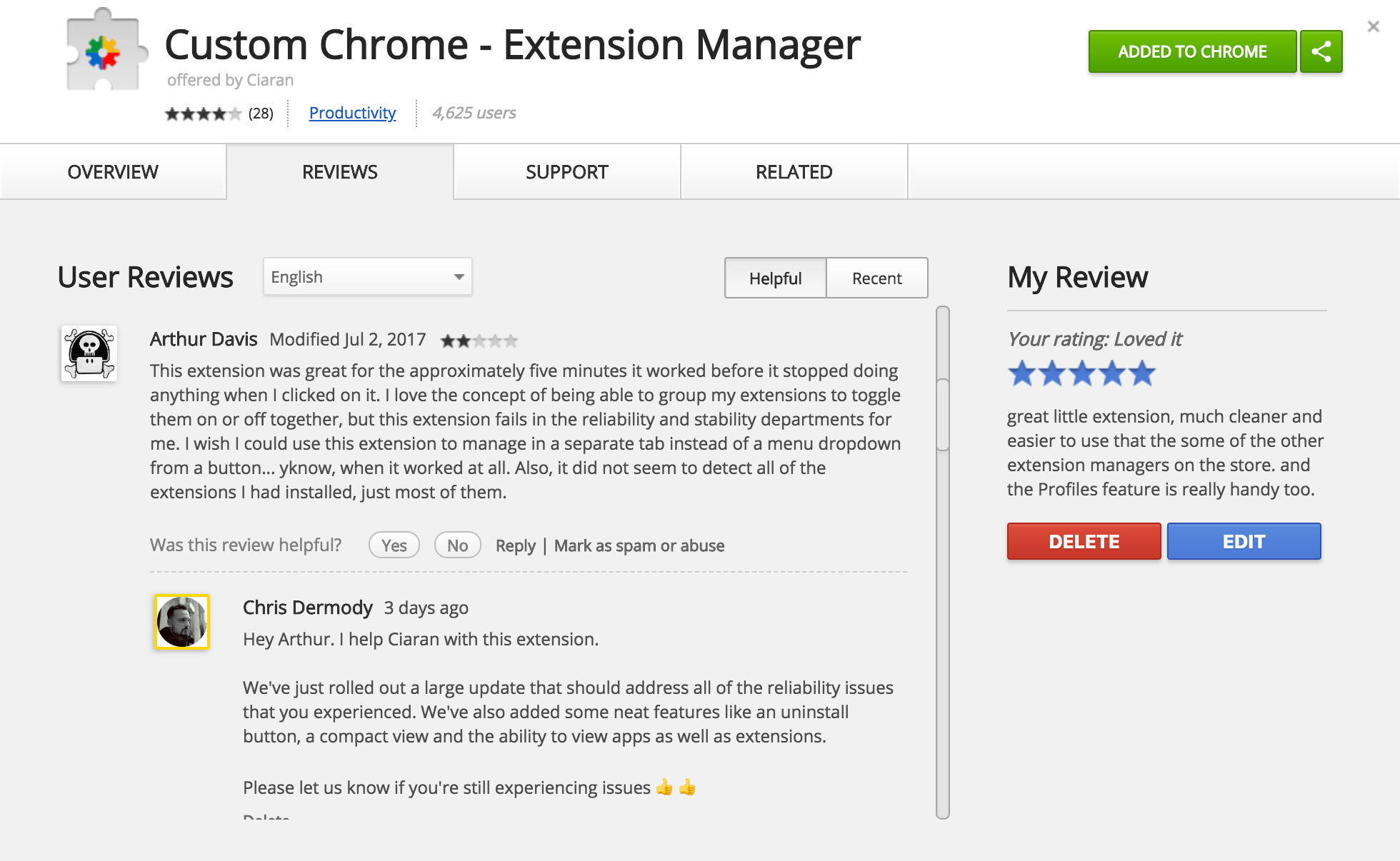 Users are understandably disappointed, the extension has such promise!

Overall, we weren't doing too badly. 4/5 stars from 28 ratings, but reading the reviews it was clear we could be doing a better job.

To be perfectly honest, we sort of forgot about this poor little extension. Obviously we used it every day for ourselves, but we forgave its issues because it sort-of worked, usually. Over the course of 3 years, it was probably safe to describe it as "abandonware", and some of our reviewers knew it.

That said, it was obvious we had something. People liked that it was pretty, and were optimistic for its future. It's interesting how forgiving people can be of software that they haven't paid for...

As a matter of course, we installed Google Analytics on the extension so that we could track events and prove or disprove our assumptions about whether features we added were actually being used.

But, as I said, we kinda forgot about poor old Custom Chrome, so we never really looked at the stats after the initial launch, but we knew they were there if we ever needed them.

Then when I wrote a post on my January 2018 stock-take of current side projects, I remembered old chrome extension, and decided to take a peak at the stats. 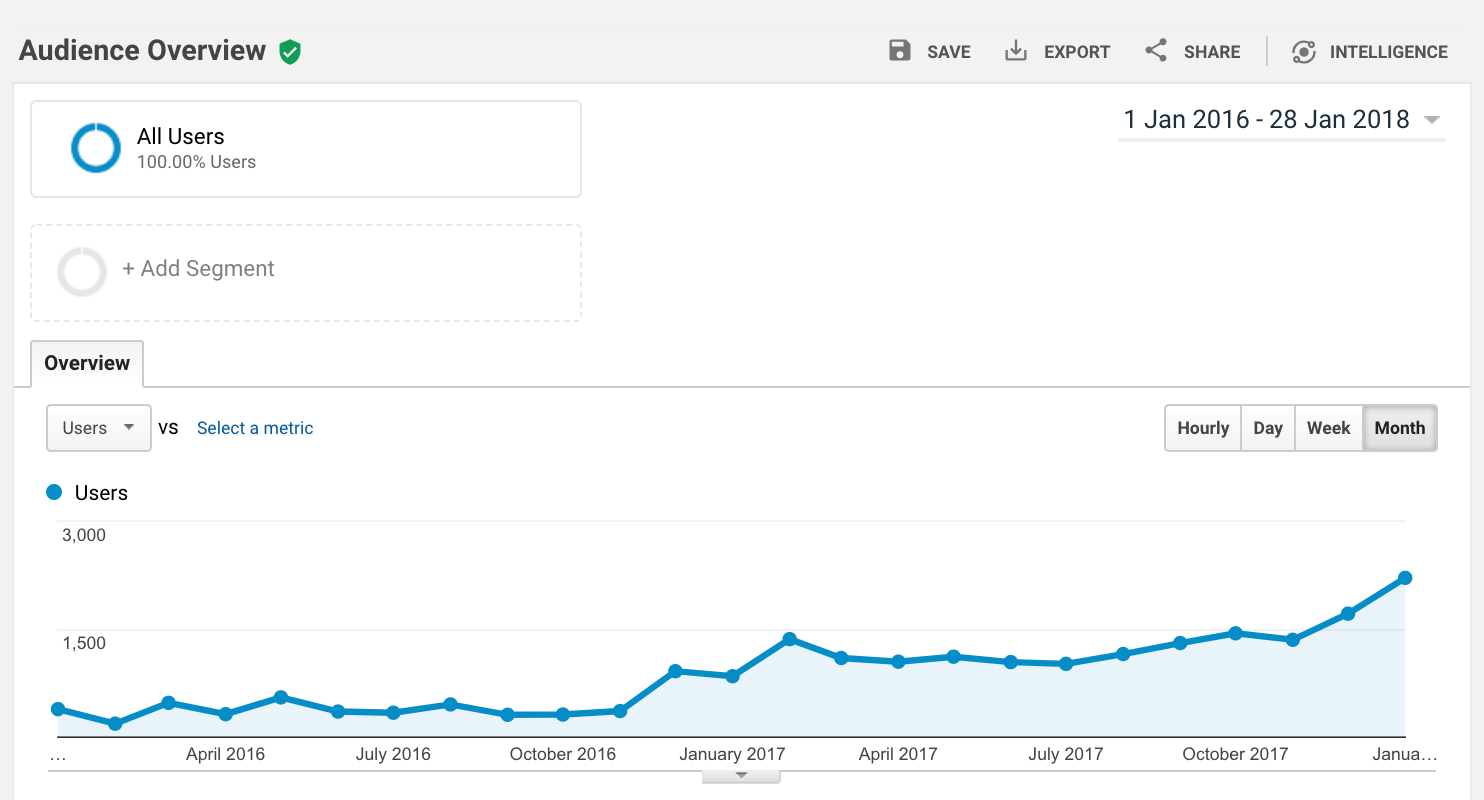 Despite our reliability issues, there's a distinct upward trend! This really encouraged us to get the finger out and fix the problems, as well as adding some new features that we found in the reviews.

We've obviously spent a lot of time trying to sort out the bugs and reliability issues. This meant a lot of change to the underlying code, as well as an update as to how we save user data in chrome.sync().

But we've also spent time adding some neat new features too, and we think they make the experience that much better.

The layout we went with initially looks good, and we were happy with it for our first version, but revisiting it a few years later we felt there was a lot of wasted space. We didn't need to always show the extension description, and the icons could be smaller too.

Comaprison of non-compact versus compact view

We added a toggle that users can use to enable the compact styles, and we really like the new look. And if our stats are to be believed, it seems our users do too! 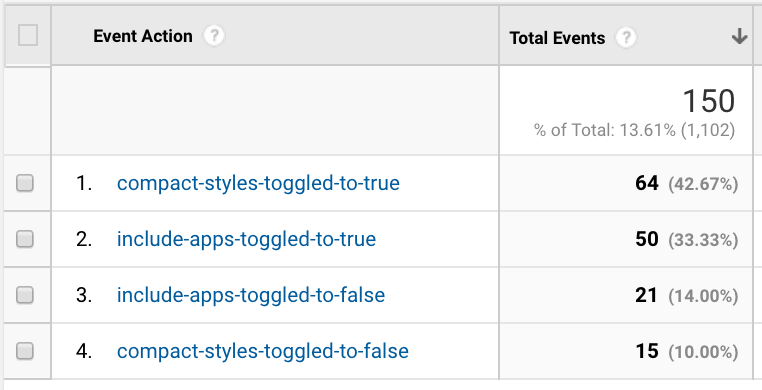 People seem to prefer compact styles, as well as including apps in the view

You might notice in the screenshot above that we're also tracking events to do with showing apps. This was a suggestion from a review, and we like it.

The API that we're using to fetch the extensions can be tweaked to include apps, so we added it in, and labeled all apps with an "app" badge.

So far the ratio seems to be solidly in favour of people wanting to view their apps. Event tracking for the win :)

Sometimes I open Custom Chrome and notice an extension I tried out but don't use, and I want to get rid of it.

Well, thankfully there's an API for that, and we added that functionality to our latest version. It makes it quick and easy to remove an extension without any fuss. 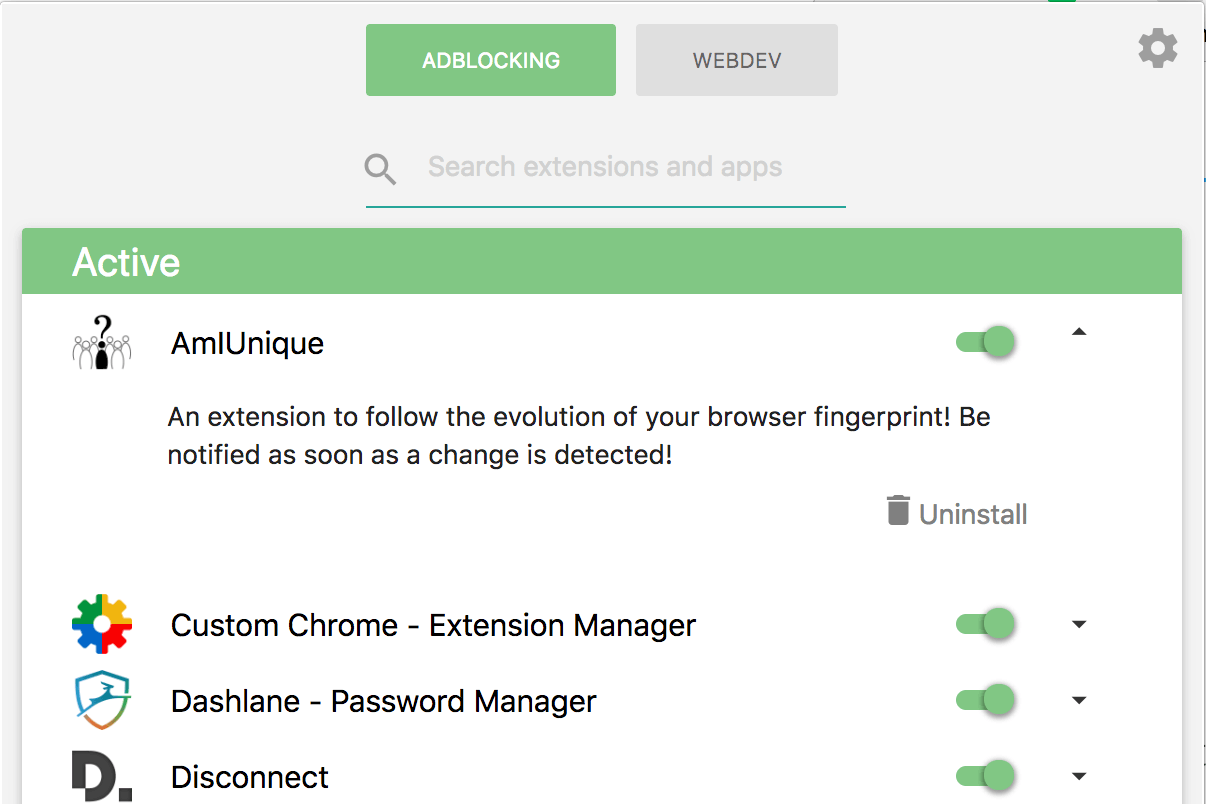 Our previous version didn't have much in the way of communication with our users. That changes now.

We've added a modal to display a list detailing what changes we've made and, where applicable, why we made them. We also included links to our twitter pages (@cderm and ciaranmag) so that people can reach out to us directly if they like.

The modal should display the first time the extension is launched after an update, but we've also made the modal easily accessible from the settings menu too, so users can always check out what's new.

I'm really happy that we took the time out of the first part of 2018 to look at Custom Chrome again. I think it has real potential to continue to grow and thrive, especially now that most of the kinks should be worked out :)

We've got a few ideas to make it even better, but we'd love to hear your feedback.

Let us know in the comments below what your thoughts are, or reply to any of my emails when you subscribe, I respond to every one. :)